Use funds to gain resources

You can get some resources and increase production, at the Market.

Market appears, after you build a Market, on Buildings.

New items and options appear, at the Market, as your empire grows.

Boost
Add a photo to this gallery

You can buy some resources, at Market:

Market trade appears, after you build your first Market, on Buildings.

The cost of resources, for Market trade, is determined by Market ratios.

Deal with a merchant

a new deal is offered every 10 minutes

You can buy resources of a Merchant, at the Market.

A Merchant appears at the Market, after you research Deals on Technologies.

A new merchant arrives, at the Market, every 10 minutes, after you reaearch Deals

Use trains to get resources

Send trains to get resources for coin

Your total trains and maximum allowed in game, displays on Market, after you build a Train station.

Trains appear on Market, after you build a Train station.

Resources you can get
(table, write some stuff here)

Get resources by trains
(write some stuff here, bp list)

Use diamonds to increase productiom

Use diamonds to boost production 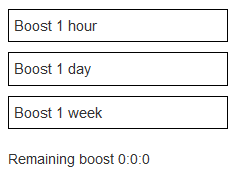 You can double your current production output by spending diamonds. This is calculated after all other production bonuses are calculated. For example, if you currently produce 20 wood per second, the diamond bonus would provide you 40 wood per second for the duration of the bonus.

Retrieved from "https://keep-kraft.fandom.com/wiki/Market_(pane)?oldid=13921"
Community content is available under CC-BY-SA unless otherwise noted.